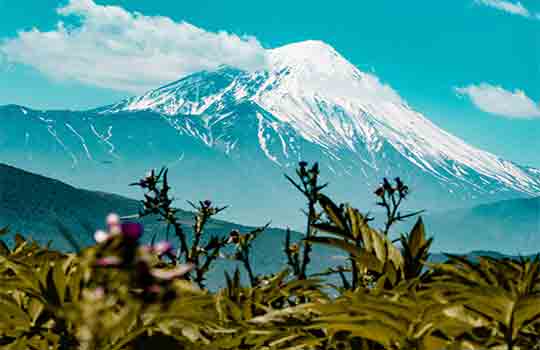 Damavand, A Great Mount of Iran

Mount Damavand symbolizes the glory of Iran, as an ancient country. Its high ever snow-capped peak along with lush slopes filled with poppies is a unique picture of Iran’s national symbol.

Damavand, the Highest Mount of Iran and the Middle East

With a height more than 5670 meters, Damavand is the highest Mount in Iran and the Middle East. It is also known as the highest volcano of Asia. Based on topographic prominence, it is ranked the 12th Mount of the world. And the second mount of Asia After Everest Mount.

It is noteworthy that the Mounts with high topographic prominence, are considered as the highest point in a vast area. Such Mounts, which have high importance for professional climbers, offer a wonderful visual beauty. Because they are visible from far away.

Where is Damavand Located?

Damavand is located in the north of Iran, Mazandaran Province. It is in a close distance from Tehran. A spectacular view of this beautiful Mount is visible from the southern coasts of the Caspian Sea. It is also the highest Mount of the Alborz Range, and the cities of Rineh and Gazang lie on its slope. 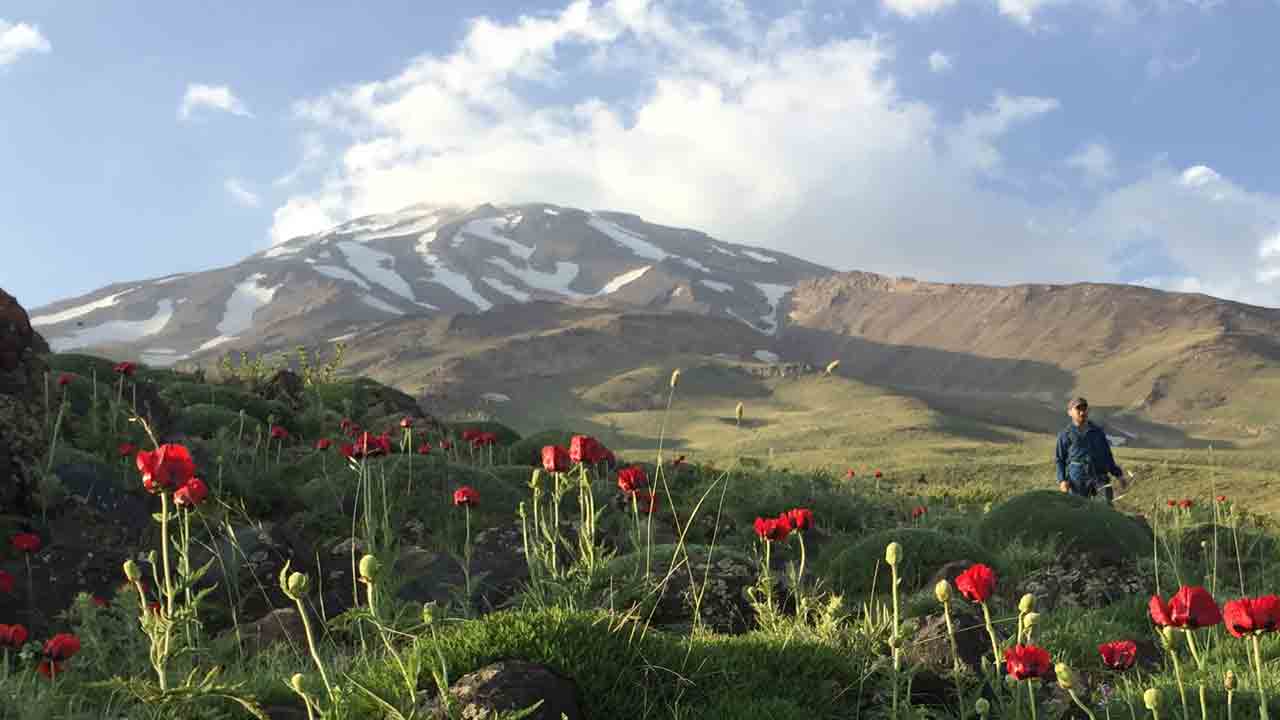 Damavand in the Culture and Literature of Iran

This Mount is known as an Iranian epic symbol. In the other words, it is the symbol of Iranian resistance against tyranny and alien rule in Persian literature. So, it has been mentioned frequently in Iranians’ great epic, Shahnameh. In addition, Iranian classic and contemporary poets have repeatedly mentioned Damavand and praised its beauties in their poems. It is the only Iranian mountain having been depicted on coins and bills over and over.

The Nature of Damavand, an Attractive Choice for Hikers

This Mount offers delightful sceneries to the nature lovers in every season of the year. This region has fresh air, roaring rivers and many hot springs. So, it is considered as an appropriate habitat for plants and animals. It is also an attractive destination for the ones interested in botany.

Up to the height of 2000 to 3000 meters, the slopes of Damavand are fully covered with poppies. These poppies redden the foothills of this Mount in the spring, which result in its indescribable beauty. 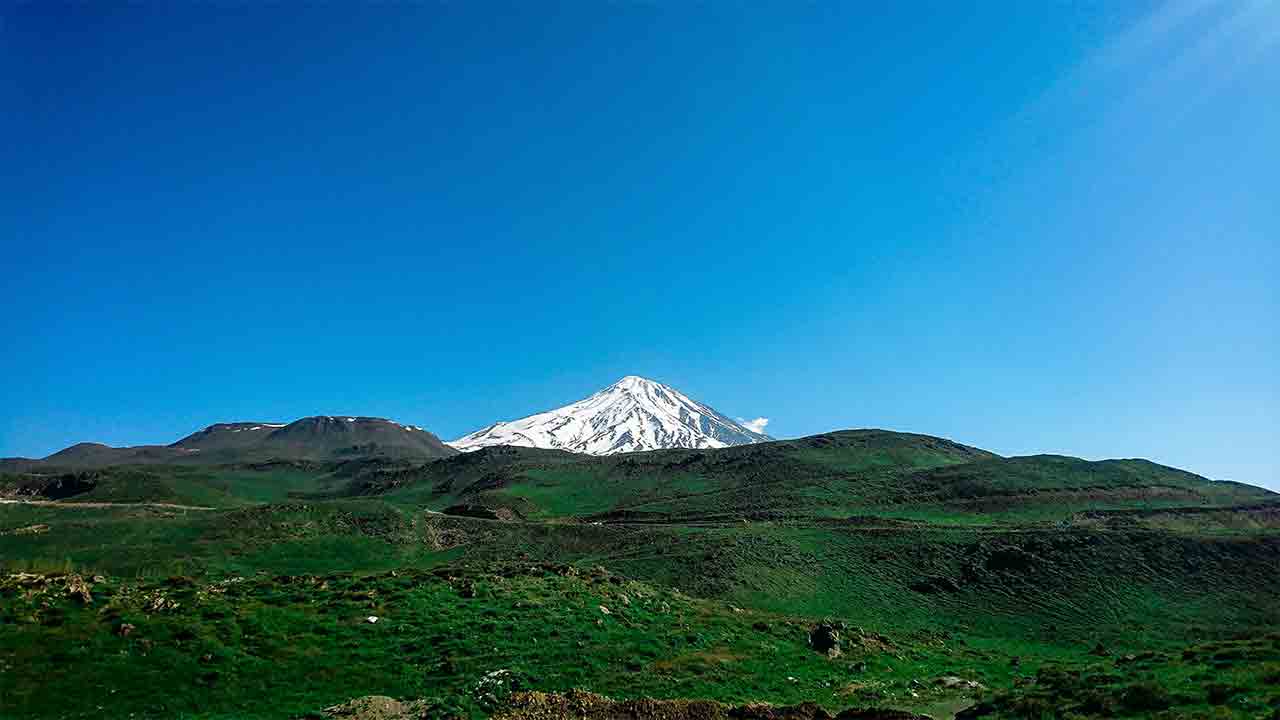 The Animal Species of Damavand

Various animal species also are a part of the treasures of Damavand’s biodiversity. The unique nature of this region has provided an ideal condition for different animals. Many of these animals live in the west and north of this region. Some of them live in the heights in the warm seasons, but leave the heights gradually as the weather grows cold.

The animals living in this region are divided into predators and herbivores. The most important predators are fox, jackal, wolf and brown bear. Among herbivores, we can point out to goat, deer, wild boar and rabbit. In addition, Salmo trutta, considered as the native fish of Lar River and Lake, is so popular.

A wide range of rodents and reptiles live on the slopes of this Mount. But the most attractive part is the attendance of various migrating and endemic birds. These birds include golden eagle, owl, bat, partridge, quail, parrot and woodpecker. So, it provides a good opportunity for tourists to watch birds.

This Mount is one of the most attractive sport and nature attractions of Iran. Thomas Herbert was the first European who reached the slopes of Damavand through Firuzkuh, in 1628. Since then, many climbers annually ascend this Mount.

To reach the peak of Mount Damavand, there are several routes. The easiest one is the southern route and the toughest one is the northern route. All routes leading to the peak of Damavand have shelters. The first Iranian mountain eco-camp was constructed in Damavand Slopes for the use of tourists and climbers.

In terms of appearance, Mount Damavand is very similar to Mount Fuji, Japan’s highest mountain. However, the difference between these two mounts is that Fuji is 3776 meters high while Damavand is 5670 meters high. Besides, the peak of Fuji is round while the peak of Damavand has very steep slopes. 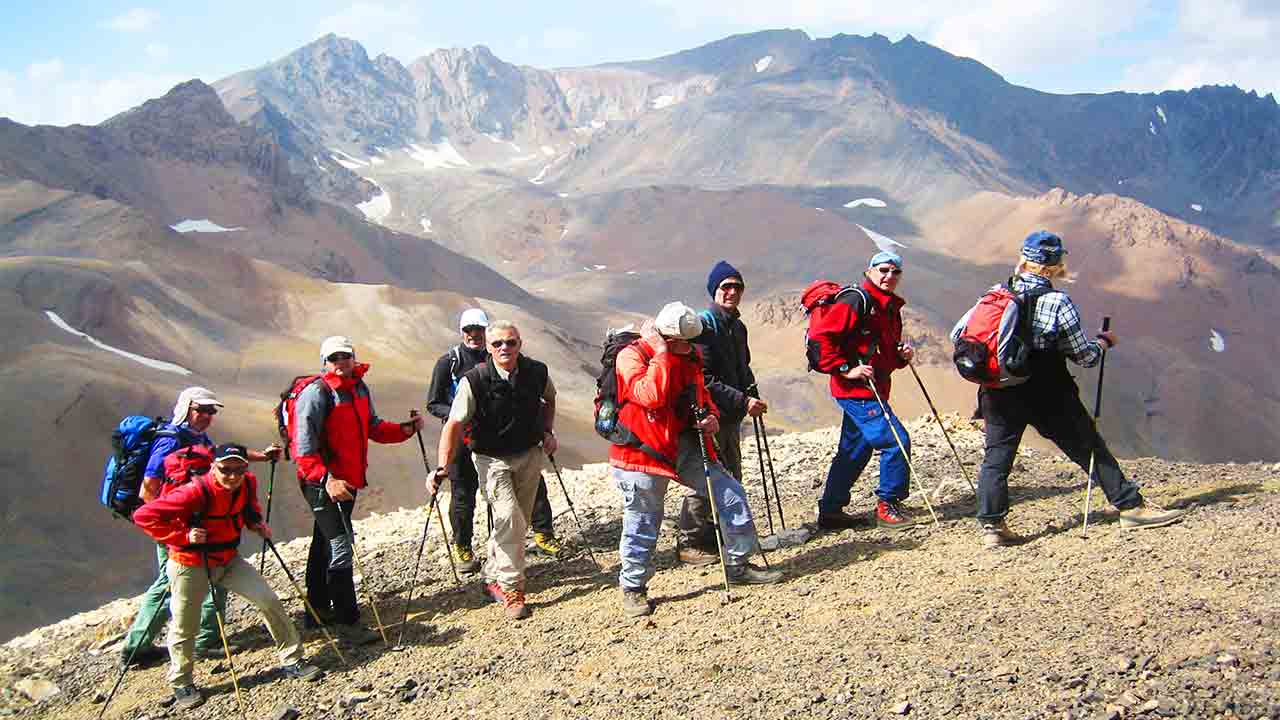 The Attractions of Mount Damavand

In the southern route, there is a waterfall that is frozen throughout the year. That is why it is called “The Frozen Waterfall”. Being located at a height of 5100 meters, it is also referred as the highest waterfall in the Middle East.

There are considerable glaciers in this mountain, the most important of which are located in the northern and northeastern faces. Some of them are so difficult to access because of the steep slope. Yakhar Glaciers in the northeast is an evident example. Among the other important glaciers of this region, we can mention Siuleh, Dobi Sel and Aroosak (literally means doll). 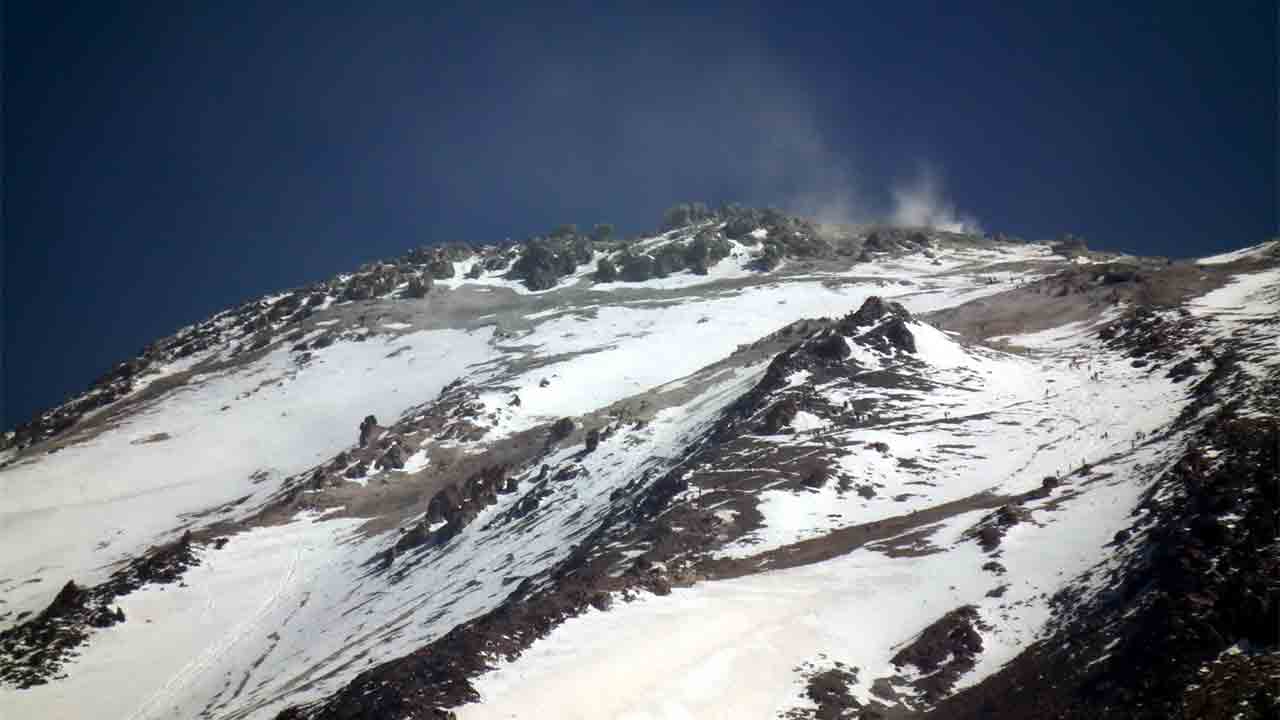 Being considered as an important volcano, this mountain is home to many hot springs. The most important one is Larijan hot spring, located in a region of the same name and Lar Valley. The water of this spring is used to heal chronical injuries and skin diseases. There are baths with small pools close to this spring that is used by the public.

In 2008, this mountain was registered as the first natural phenomenon in the list of the National Heritages of Iran. The third of July has been named after this Mount in the Iranian calendar. It is interesting to know that this day coincides with the Tiregan ancient festival. According to Iranian mythology; the neighboring countries, Iran and Turan, agreed to share the borders by shooting an arrow on this day. Then Arash, the best Iranian archer, shot an arrow towards the east from the top of Mount Damavand so that wherever the arrow landed, the borderline would be there. Arash shot this arrow with all of his power to extend the border of Iran as far as possible. But he lost his life for sustainability of Iran.

Travelling to Damavand, the Highest Mount of the Middle East

On your trip to Iran, don’t forget to visit lush slopes of this Mount. This Mount has a rich fauna and flora. It also interests the interested ones to climbing. 1001 Nights Tours has provided unique tours towards this region. To know more about such tours, click here. You can also click here to study about the other attractions of Iran.
We always appreciate the suggestions you share with us via email.